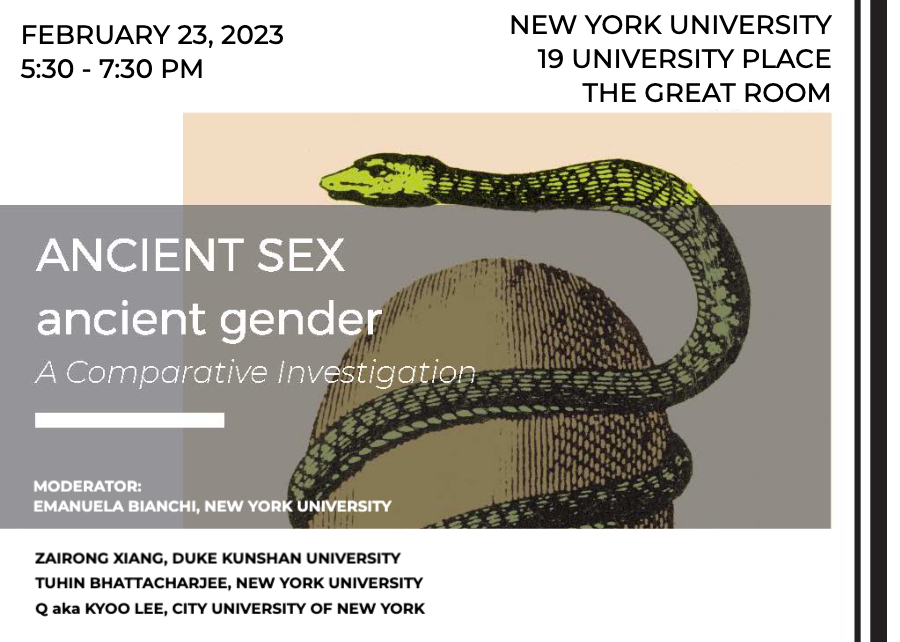 This symposium wagers that any impulse to investigate origins, an impulse surely animating the study of the ancient world, will inevitably encounter the problematic of sexual difference. Bringing together three comparative literature and philosophy scholars with expertise across Ancient China, Mesopotamia, India, Mesoamerica, and Greece, this international, comparative, decolonial, queer symposium will engage speculative poetics to encounter anew questions of sexual difference and sexuality across the ancient world.

Tuhin Bhattacharjee, is a Ph.D. student in Comparative Literature at NYU working at the intersection of Ancient Greek and Ancient Indian philosophy and literature, 19th and 20th century Bengali literature and film, and psychoanalysis.

Kyoo Lee, currently visiting Yanbian University as YBU Distinguished Professor, is a philosopher, writer, critic and a Professor of Philosophy and Gender Studies at the City University of New York. The author of Reading Descartes Otherwise and Writing Entanglish, she works widely in the interwoven fields of the Arts and Humanities. A recipient of faculty fellowships from Cambridge University, KIAS and the Mellon Foundation among others, her “philopoetic” writings have appeared in 3:AM Magazine, Asian American Literary Review, The Brooklyn Rail, Flash Art, PN Review, Randian, The Volta and the White Review as well as numerous academic journals. A member of PEN America Translation Committee (NYC) and Poetry Translation Center (London), and the coeditor of philoSOPHIA: A Journal of transContinental Feminism, she is also the faculty leader for the Mellon Seminar at the CUNY Graduate Center, “mp3: merging poetry, philosophy, performativity.”

Zairong Xiang has a PhD in comparative literature (Tübingen, Perpignan), and is currently a postdoctoral researcher of the DFG Research Training Group ‘Minor Cosmopolitanisms’ at the University of Potsdam. Before Potsdam, he was a research fellow at the ICI Berlin Institute for Critical Inquiry. His research draws from a wide range of disciplines, areas, and paradigms, notably feminist and queer theories, literature, and art in their decolonized variants in Spanish, English, Chinese, French, and Nahuatl. His first book, Queer Ancient Ways: A Decolonial Exploration (2018, punctum books), advocates a profound unlearning of colonial/modern categories as a pathway to the discovery of new forms and theories of queerness in the most ancient of sources, namely, Babylonian Enuma Elish and Nahua creation myths. He has co-edited a special issue of GLQ – A Journal of Lesbian and Gay Studies on ‘The Ontology of the Couple’ and is currently pursuing two projects, dealing, respectively, with the concepts of ‘transdualism’ and ‘the counterfeit’ in China and Latin America. He has also curated “minor cosmopolitan weekend” held at the Haus der Kulturen der Welt (2018).

This event is co-sponsored by the Center for Ancient Studies, the Program in Poetics & Theory, the Department of Classics, and the Center for the Study of Gender & Sexuality.