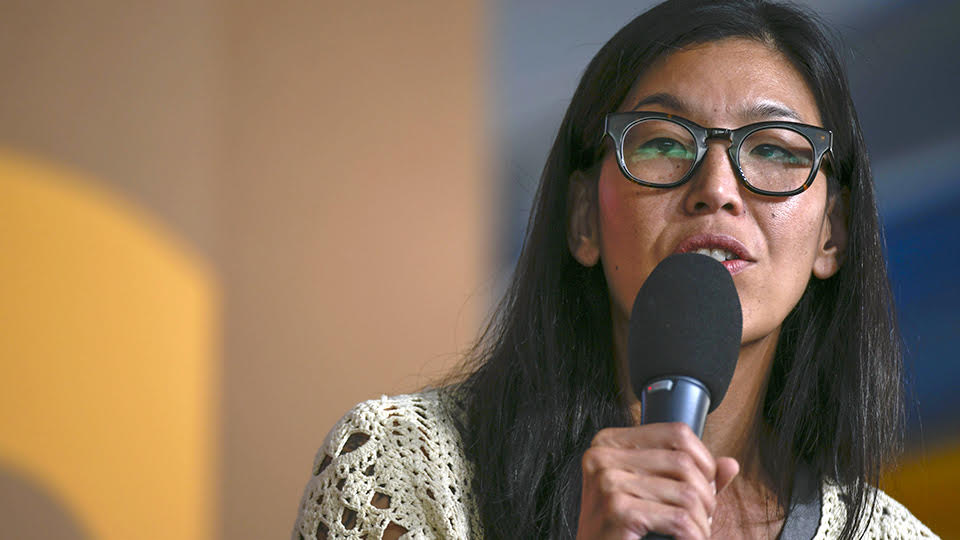 UPDATE: We at the Asian/Pacific/American Institute at NYU have been deeply shaken by the intensification of anti-Asian violence and especially the tragic events that unfolded in Georgia last night. In light of this, we have shifted the format of this program. We will begin with a conversation with Ai-jen Poo and Alina Das, and then move to a dialogue with the audience, in order to provide an opportunity for sharing and reflection. We hope to see you this evening.

“In the work of organizing we always say that a victory isn’t a victory if no one feels it’s theirs. And if you want change, you have to first envision it, and then name it to summon it into existence.” —Ai-jen Poo

As part of SKIRBALL TV, we welcome Ai-jen Poo, director of the National Domestic Workers Alliance, to deliver a lecture on the theme, “Our Politics, Our Selves.” Poo will address her evolution as an organizer, the impact of the pandemic and uprisings for Black lives on her organization’s members, and the significance of the 2020 US elections. A conversation with immigrant rights lawyer Alina Das (NYU School of Law) follows.

Accessibility note: This event will be hosted virtually on Zoom. A Zoom account, internet access, and a smartphone or computer is required. Closed captioning will be provided for all audio. If you have any access needs, please email apa.rsvp@nyu.edu as soon as possible.

Ai-jen Poo is a next-generation labor leader, award-winning organizer, author, and a leading voice in the women’s movement. She is the executive director of the National Domestic Workers Alliance, director of Caring Across Generations, co-founder of SuperMajority, and trustee of the Ford Foundation. Poo is a nationally recognized expert on elder and family care, the future of work, gender equality, immigration, narrative change, and grassroots organizing. She is the author of the celebrated book, The Age of Dignity: Preparing for the Elder Boom in a Changing America (The New Press, 2016). Together with Alicia Garza, Poo co-hosts the podcast, Sunstorm. Follow her at @aijenpoo.

Poo began her career in the mid-1990’s as a volunteer at the New York Asian Women’s Center supporting survivors of domestic violence, and went on to work as an organizer at CAAAV: Organizing Asian Communities (then, the Committee Against Anti-Asian Violence (CAAAV)).

She has been recognized among Fortune’s 50 World’s Greatest Leaders and Time’s 100 Most Influential People in the World, and she has been the recipient of countless awards, including a 2014 MacArthur “Genius” Award. Poo has been a featured speaker at TEDWomen, Aspen Ideas Festival, Cannes Lions Festival of Creativity, Skoll World Forum, and the Obama Foundation Inaugural Summit. She has made TV appearances on Nightline, MSNBC, and Morning Joe, and her writing has been featured in The New York Times, The Washington Post, TIME, Maire Claire, Glamour, Cosmopolitan, and CNN.com among others. Poo has been an influential voice in the #MeToo movement and attended the 2018 Golden Globe Awards with Meryl Streep as part of the launch of #TimesUp.

In twelve short years, with the help of more than seventy local affiliate organizations and chapters and over 200,000 members, the National Domestic Workers Alliance has passed Domestic Worker Bills of Rights in nine states and the city of Seattle, and brought over two million home care workers under minimum wage protections. In 2011, Poo launched Caring Across Generations to unite American families in a campaign to achieve bold solutions to the nation’s crumbling care infrastructure. The campaign has catalyzed groundbreaking policy change in states including the nation’s first family caregiver benefit in Hawai’i, and the first long-term care social insurance fund in Washington State.

Alina Das is an immigrant rights activist, lawyer, and professor at NYU School of Law. Das is the co-director of the NYU Immigrant Rights Clinic, a leading institution in national and local struggles for immigrant rights. She defends the rights of immigrants facing deportation and partners with community groups on immigrant rights campaigns. Her legal scholarship has been published by leading law journals and cited by the US Supreme Court. She is the author of No Justice in the Shadows: How America Criminalizes Immigrants (Bold Type Books, 2020).