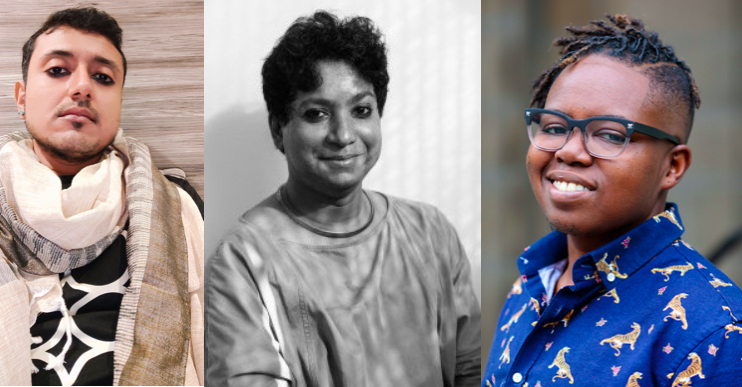 ‘Trans*’ as a prefix suggests movement and boundary-crossing. Most productively, it has also come to denote the mobility and transitions across genders and sexualities. How can we think about trans-ness trans-nationally and trans-culturally? This panel will focus on multiple ways of thinking about cross-border embodiments and movements through gender and sexuality by putting US and South Asian (and Americanist and postcolonial) understandings of trans* lives and bodies in conversation with one another.

Sayan Bhattacharya is a PhD candidate in the Department of Gender, Women, and Sexuality Studies at the University of Minnesota and is a queer activist from West Bengal, India. Sayan’s doctoral work investigates the complex and multi-linear roles of memory in the way transgender and queer rights are articulated in India. Their research interests include social movements, feminist ethnography, queer studies, transgender studies, critical disability studies, Dalit Studies and affect.

Anindya Hajra is a transfeminist, transgender rights and social justice activist based in Calcutta, India whose relationship with transfeminisms has spanned about two decades. In 1998 she co-founded Pratyay Gender Trust, one of the early community led collectives in India that became a support space for gender non-conforming and transgender persons facing harassment, stigma and violence for their gender identity/ expression. Pratyay today focuses on issues surrounding systemic discrimination surrounding Transgender Persons’ Right to Work, Economic Justice and Inclusion. She has been deeply involved with sexualities, gender, anti-homophobic/transphobic violence and a significant part of her work is focussed on collectivisation of transgender persons across India, advocating with policy makers and building synergies across other human rights movements.

C. Riley Snorton, Professor of English Language and Literature, is jointly appointed in the department and the Center for Gender and Sexuality Studies at the University of Chicago. Snorton is a cultural theorist who focuses on racial, sexual and transgender histories and cultural productions. He is the author of Nobody Is Supposed to Know: Black Sexuality on the Down Low (2014) and Black on Both Sides: A Racial History of Trans Identity (2017). Snorton’s next monograph, tentatively titled Mud: Ecologies of Racial Meaning examines the constitutive presence of swamps to racial practices and formations in the Americas. Currently, he is currently also co-editing The Flesh of the Matter: A Hortense Spillers Reader (forthcoming). He is the co-editor of GLQ: A Journal of Gay and Lesbian Studies.

Centre for Studies of Gender and Sexuality at Ashoka University